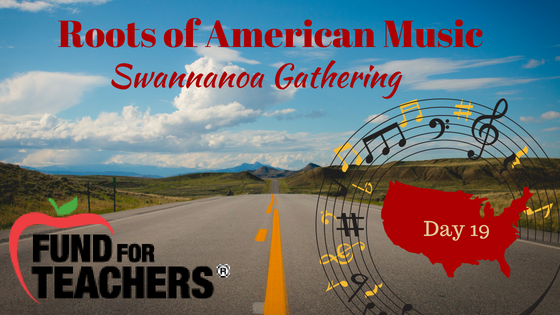 In my post from Day 4 of Swannanoa I left off just before I went to enjoy some Contra Dancing.

Here is a small clip of the dancing which took place in an unairconditioned gym that looks like a house on the outside. 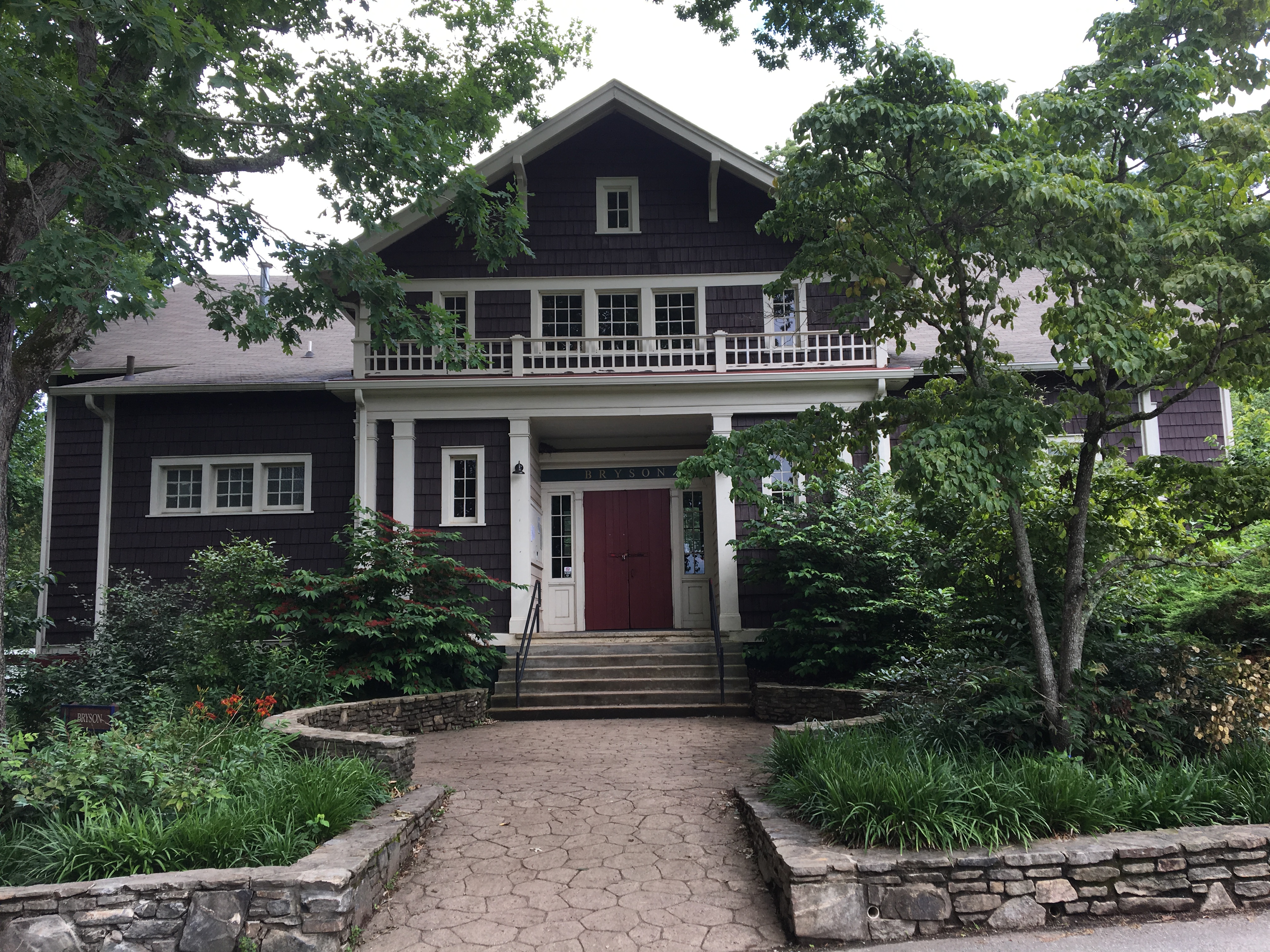 This post will be an attempt to retell the wonderful adventure of Friday.

As is often the case, Friday at camp is the culmination of the work done all week. Therefore, in the first class, Appalachia to Ozarks, we worked first on our class song that we presented later that evening for the student showcase. We chose to sing “The Brazos River”.  For more information click HERE.

Then with what remained of class we had a closer look at some of the songs we hoped to cover but had not yet enjoyed. These

“High on the Mountain” – written by Ola Belle Reed

“I have Endured” by Ola Belle Reed which is just a GREAT song!

Then as a class we decided to work on the song we would present for the student showcase.  This class was truly a joy and I especially enjoyed the time spent getting to know everyone!  Joe Newberry proved to be an enthusiastic and encouraging teacher who brought with him a delight in the songs themselves that was contagious. 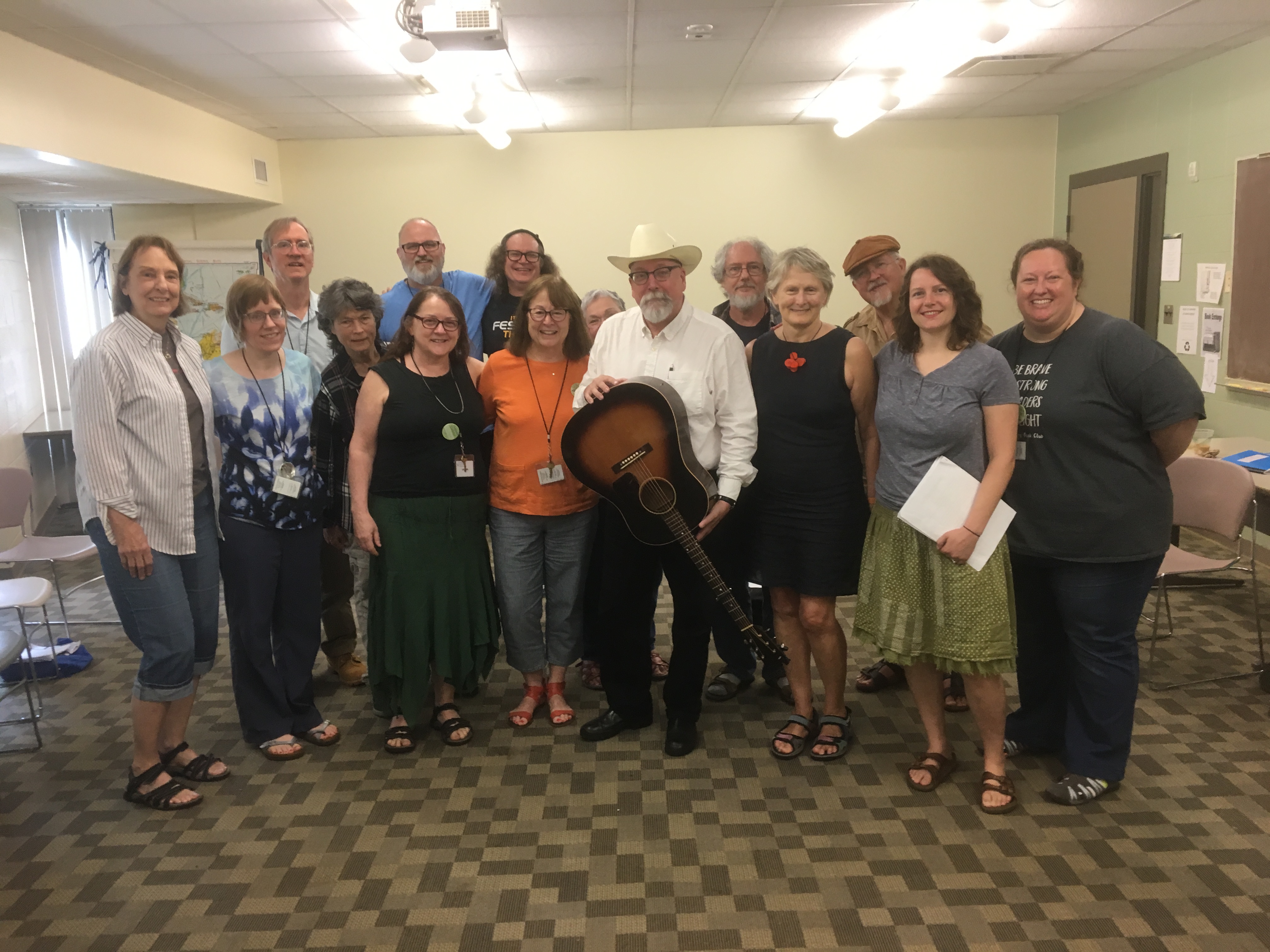 As soon as class was over I began the arduous task of carting all of the STUFF in my second story dorm room down to my car.  As much as I had enjoyed my time in Swannanoa I found the room accommodations uncomfortable enough to believe it wise to stay in a hotel on Friday night rather than stay until Saturday morning.  This decision was made to ensure that I could begin my journey home being entirely well rested and ready to drive and drive and drive all the way back to Texas.

The day was not over and I had more learning to do, but by lunch time, my car was completely packed and I was ready to check out when the opportunity presented itself.

During the Song Interpretation class it was my turn to present a song.  All week I had debated about which song to present.  The problem is that I have not been in the habit of learning songs other than for teaching in several years.  Eventually, I decided to sing an arrangement of Psalm 130 that I had composed a few years ago.  I can sort of fake my way through the piano part, but because the focus was on the singing of song literature rather than playing piano I decided to sing the song acapella.    Happily I received some great feedback concerning the song structure and having the opportunity to reflect upon and discuss the song I have some ideas of some minor edits that can be made to improve the overall cohesiveness of the piece.

Here I will include a recording of the song from a church service from December 29, 2013.  I had agreed to sing at church a good while earlier, and then my dad became seriously ill, so by the day I was supposed to sing, there had been considerable doubt as to whether or not I would be in church on that particular day.  My sweet friend Barbara Jones played piano for me and made the accompaniment much sweeter, (as she always does). My only regret is that we went so slow.  However, on that particular day, no other song could have expressed the cry of my heart more clearly, and as a result, it has ever since been a favorite of mine.

During the “If you can speak you can sing class” led by Dr. Kathy Bullock, we spent our time preparing for our student showcase.  This was one of the sweetest classes I have ever taken and is one that I enjoyed even more than  I can say.   This picture was taken in the dark because the electricity had gone out all over campus.  We had such a lovely time together and I miss these sweet folks! 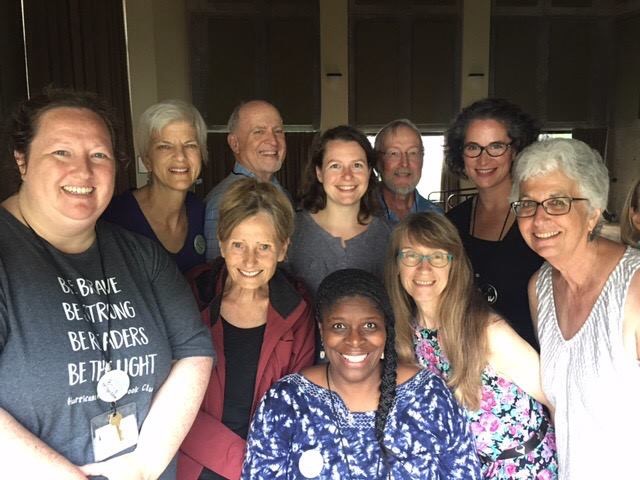 One of the joys of the day was wearing my “Hurricane Harvey Book Club” shirt.  I made sure to wear it at both of my camps mostly because being from Houston folks often asked about how we were getting along after Harvey and it gave me an opportunity to share the wonderful work my friend Kathryn Mills did during the hurricane.  I’m super happy to work with amazing folks like her and so I wore my book club shirt with pride.

Because the electricity had gone out, dinner on the last night was in the dark.  However, the students at Warren Wilson College were unphased and our dinner was delicious as it had been all week.  But, once again my decision to move to a hotel at the end of the evening was proving to be a good one.

The student showcase took place in the pavilion

It was a wonderful time of celebration.  Because the power went out and was not expected until around midnight, the amazing sound guys were able to piece together a new sound system powered by the extra battery in a pick up truck. Then just as the concert was about to begin, the electricity came back on!  Everyone cheered!  It was super awesome!

After each class performed, students who had signed up to do so could perform as individuals or in small groups.  Earlier in the week I had decided to be brave and sign up.  I sang my arrangement of Psalm 23 acapella.  I was happy to see that others also sang acapella and still others sang original songs, so my song fit in with the rest without a fuss.  If you would like to hear a recording of Psalm 23 that is similar to what I sang at the student showcase, you can hear it below.

After the concert was over, I got in my car and drove to the hotel less than five minutes away.

This is NOT the final installment of the Roots of American Music series.  As it turns out as on Friday the 8th, I had several days of travel ahead of me and each day held a new joy and a new adventure.  Stay tuned!  I hope to have this series complete by the end of next week.