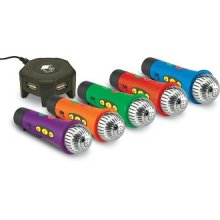 This fall I had a project funded through donorschoose.org  for a pack of small handheld
digital recorders. Since I have never had anything like this before in my
classroom, I was filled with all sorts of dreams about ways that we could use
them in class to create digital portfolios of student work.

Well, I’m here to
say that the reality is even better than I had hoped.

When I received my
Easi-Speak  pack I was right in the middle of 5th grade show and then it
was the holidays and well……. I’m just now getting around to playing with
these little guys with any sort of intentionality.   So far I’m just giddy with possibilities!

Here is what I’ve tried so far!
Scratch Group Recordings:
The 100th Day of school sort of snuck up on me, and since I had my
guitar with me that day, we made up a song.
It was pretty cute as far as ridiculously on the fly song go, so I
thought I’d record the children singing it with me.   I thought that
the digital recorder did a good job of capturing the entire class singing.  It’s by no means a quality for public
sharing and it is no replacement of “real” recording equipment, but it is a good representation of the “daily”
work done in class and certainly a good addition to a digital portfolio.
Individual Recordings:
I REALLY like this, probably because this is how the microphones
were designed to be used.  So far, I’ve
only had one recorder out at a time, but I think that soon I’ll have all of
them out at once.  Wouldn’t it be nice to
be able to create an accurate record of student singing that is a concrete
support of your qualitative rubric?  The
nice thing is that since these recorders are designed to be used by one student
at a time, even with background noise, you still get a REALLY nice sound.
Emergency Practice Tracks:
There you are with only about 1 class left in your voice and that
afternoon you have your less than independent choir students coming in for
rehearsal.  I wore the recorder around my
neck and recorded a rehearsal track for my students who sing part 2. Now granted, I was at a
piano with a volume control, but it was so much easier than any other option
available to me at the time.
Discipline documentation:
So I have to admit that I discovered this by accident. It’s that
time of year where the chatty cats and cathys in my class have gotten rather
bold and the effectiveness of those natural consequences that worked just last
week is slipping.   Creativity is in order to keep my students from “spring breaking” too soon.I’d been playing around with my little recorder when my class with my favorite
chatty cat who uses ALL of my creativity came into class ready to see if I had
any new ideas.  Lucky for me I still had
my little recorder in my hand.  I smiled
hugely at him, pointed out the red “record” light and said, “This microphone
will record all of your good work today, why don’t you wear this around your neck and sit close by me today.”….
He was literally stunned into silence. And THEN he asked good questions and did
his work.  It was a PERFECT day!  Not to mention the fact that a few of his “chatty
cat crew” wanted a microphone too…. I told them truthfully that my microphone
would catch all of their good work too.
They were good as gold.
Eventually one caught on and said, “What if we aren’t good?”  I said, “Oh, it will catch that too….”  PRICELESS!
Ideas that I haven’t yet tried!
·     Record
instructions for an independent activity or EVEN record your sub plans, burn it to a CD    and you are all set!
·     Auditions
– now that my students are learning how to use it, the next step will be to
formalize the procedure.  I either have
to figure out a way to create blind auditions, OR I have to train my students
to always say their name and teachers name before they start singing or
speaking because the whole idea would be to have them do their preliminary
audition just outside where I can see them but they can’t be disturbed during
their audition.  I’ve still got some
figuring out on how to make that work realistically.
·     I
also want to use this for small group interactions.  I want to give each group a task and have
them record their conversation.  It would
be a great way to keep record of who was really involved and who was more
passive.
The possibilities are endless….. What if you recorded your private lessons and gave your student a CD of the lesson?  What if students interviewed their teachers about their musical experiences?  What if students used these little recorders as a tool for music composition? I need one for each student!
What happens once you are ready to hear what you recorded?

·     You
could choose immediate playback which is useful for immediate feedback for students.
·     You
use the USB port on your computer and when you do all the MP3 files come
up.  They are in a folder and are
numbered.  I had to rename them because I’m not organized to remember what I did when……
·       If you record for a long time, it will record
in small seamless chunks
·      You could choose just to rename them and keep
them as a record as they are.
·     OR you can import them into Audacity.  Audacity  is loaded on each microphone and if you want
to edit the files, you can open Audacity immediately from the folder.  EASY!