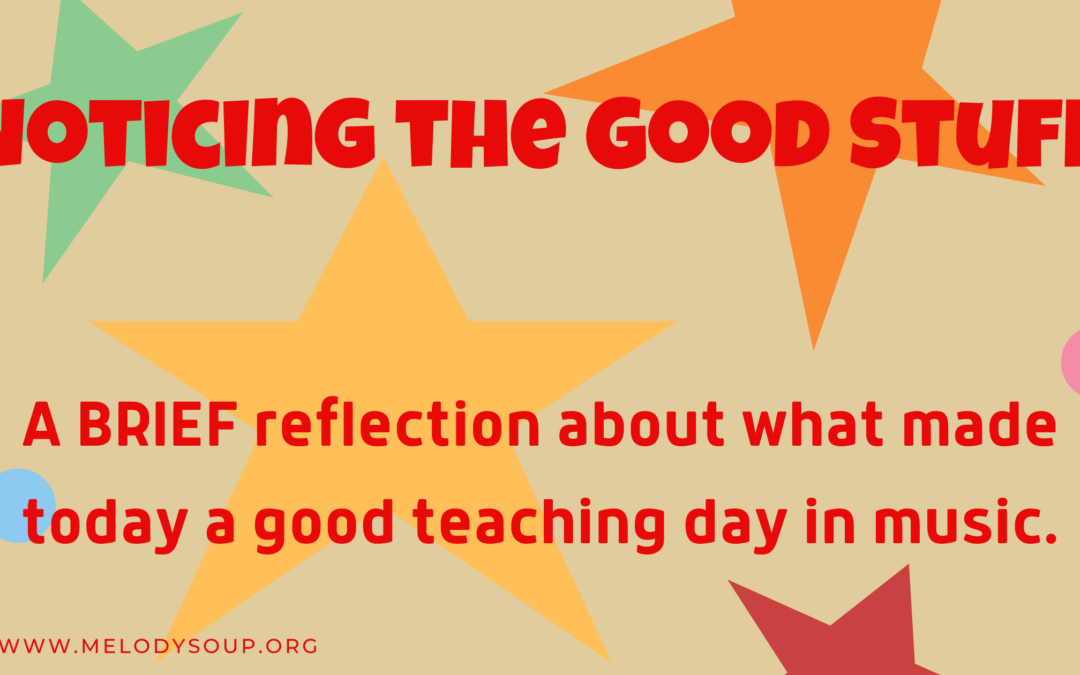 This post is entirely for me. There were so many interesting and fun things that happened that I want to remember them. It’s a good habit to take note of the good stuff. I’m taking my own advise and writing it here.

Kindergarten – the song is in them

We’ve been playing “Clickety Clack” from “Let’s Do it Again!” by Mary Helen Richards. We played it and played it and played it last Friday, so today was a day for “secret song”. They really didn’t remember the song, but they did remember the motion of their feet. They got up and moved to the music all around the room. Then I got out the form book that goes with the song. As I was sharing it with the class, one student continued to “map the song” around the room. He did it because that is what he needed to do. It was super cool because I could see the song, in how he was moving his feet.

We got to introduce our upcoming performance to students today. This will be the first performance for this group EVER because they missed both their kinder and first grade performance due to Covid. It is super exciting to actually get to have THESE students prepare something for their families.

Today we did writing tasks on the staff with 1st grade – it was a HUGE step in expectations and they were so proud to create melodic patterns on the staff. The best part about seeing students every 3 days is that students get more opportunities to practice. I’ve been able to do MUCH more writing this year!

In 5th grade we are working on chords. The students have played the chords for “America the Beautiful on ukulele, but today, because I wanted to break down the chords and go a bit deeper, we used tone chimes. The tone chimes are new and part of a grant we received from the KISD Foundation Grant. We spent time spelling all the chords that would be needed, finding the qualities (major and minor) and noticing when a change in chord quality would require the use of an accidental. The arrangement we were using happened to include a Gsus4 chord. The students were convinced that the “sus” in the Gsus4 chord was part of the video game called “Among Us”, in which “sus” is short for suspicious. They were disappointed to find that the abbreviation “sus” in this case meant suspended. The rabbit hole was super fun to explore with them and in the end, it took our conversation about chords much deeper than I had anticipated. It was fun!

In 4th grade we’ve been playing recorder pretty much every music class since just before Thanksgiving. I’ve got three classes and this class is progressing more slowly than my others. They CAN do it and they ARE interested, but it’s been a bit of a slog for them. So much so that I had planned to skip recorders today and do something completely different. However, when they were lining up, one of the students asked me, “How do you play a low C?”. One thing led to another and we spent another class time MOSTLY on the recorder. The cool part was that this class was one that had REALLY been struggling with how to avoid “air leak squeaks”. By appearances, their hands and fingers were all approximately correct, but has been LOTS of squeaking. There were at least 3 students who solved their squeaking problems today BECAUSE they learned low C. I suspect it has to do with having generally lower fine motor skills. Getting to rush ahead to the one note on the recorder that uses almost all the fingers of BOTH hands, engaged them physically more completely and improved their playing overall. I’m glad I followed their lead today. I don’t know that tomorrow’s class will be interested, but if they are, I plan on following.

2nd grade – we are composers

Our composer of the month is Clara Schumann. Today I shared with them Scherzo No 2 in C Minor as performed by Isata Kenneh-Mason. The students were enthralled. They were amazed that she played with her eyes closed. Their responses to the performance led me to hop onto the internet and find a .jpeg of a handwritten manuscript attributed to Clara Schumann. I wanted them to see how composers often capture their musical ideas with handwritten notation. Then on a whim, I showed them the online music notation platform called “Noteflight”. I put in a very simple melody, placed some whole notes in the bass and pushed “play”. The children applauded as though they had just heard Beethoven for the first time. They were delighted and wanted immediate instructions about how they could go to Noteflight. Noteflight is awesome, but I thought they might enjoy Chrome Music Lab a bit more. So I showed them the sight and when I showed them the visual composer tool, (it’s basically a visual sequencer), one of them said, “Can we write down “Rocky Mountain” with this?”. AND THEY DID! More applause ensued. We were absolutely going to have a look at the notation for Rocky Mountain today, but the experience we shared was so much richer because I followed the children.

I wish every day of teaching was like this. Since they aren’t all this way, I’m going to remember today.