Reflections On Year 1 of Teaching Ukulele 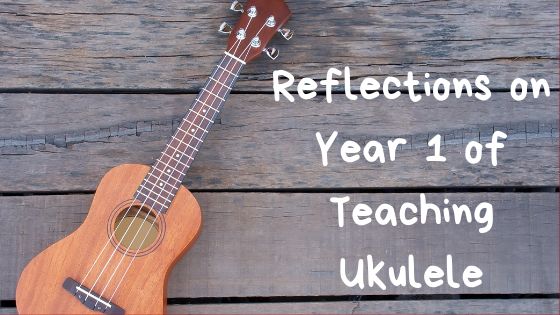 This year my fifth graders and I embarked on a new adventure…. We learned how to play ukulele. Before adding this to our musical adventure there were quite a few steps that my co-teacher and I had to accomplish.

Before we ever started planning on funding methods, my co-teacher and I did a great deal of research. We purposefully attended ukulele classes at our state convention and both purchased a personal ukulele so that we could begin the process of learning.

We played our own ukuleles in class just like we would a guitar or piano. We are also both members of music teacher groups on Facebook where the advice about what sort of ukuleles to purchase, what methods work best and how to store them is thick on the ground. We read lots of product reviews and did some comparison window shopping among the various music instruments sites.

Even when grants are not funded, the process and planning involved in composing a grant is a great method of project planning. Last spring (2018), my co-teacher and I applied for a grant within our district. We hoped to receive funds for enough ukuleles to provide a ukulele to student ratio of 1:1. At that time, as part of the grant application we had to plan instructional timeline, for our “imaginary” ukulele unit. We made decisions concerning methods, we talks extensively about what our expectations would be. We created a really good, executable plan.

When we knew for sure that we would not receive the grant we wrote, we decided to create less ambitious, more attainable projects on donorschoose.org. We settled on creating 2 projects on donorschoose.org that if funded would provide a student to ukulele ratio of 2:1. While this was not what we had hoped for, we knew that a 2:1 ratio would allow us to start using ukuleles with students, AND we could always build our collection later.

I posted my donorschoose.org project at the beginning of the summer. My co-teacher posted her project the next day. Our first class set of 15 ukuleles was funded within 48 hours by friends and family. Our second project was funded in late July by friends and family, but also by some of the amazing people I met in my travels to North Carolina.

In the fall, after I had seen the enthusiasm my students had about playing the ukulele, I created one more donorschoose.org project for an additional 5 ukuleles. Currently we have 15 ukuleles in one room and 20 in the other.

We decided upon the Kala Makala Soprano Ukulele. The cost of the ukulele is approximately $50 which is a mid-range ukulele. We store our ukuleles in two ways. My co-teacher used magazine holders on a shelf (which worked great). She has less “stuff” in her classroom and had bookshelves to spare. I decided to use command hooks and hang my ukuleles on the way. This method has also worked great. At our school most of our walls are covered with a staple friendly, spongy wall paper. I was a bit hesitant to use command hooks on those walls because I was unsure if they would hold the weight of the of ukuleles on the porous surface. However, the command hooks have worked beautifully. The initial cost was $50.00 for the command hooks. I have to take them down in a few weeks for the summer, but I’ve already purchased replacement adhesive and that cost about $15.00.

We still have all of the boxes, but we also have a generous music storage room so we have room for them.

While trolling our music teacher facebook groups and Pinterest I have seen that there are about a million ways to successfully store ukuleles. Each room is different, each school has a different level of available funding. Pretty much, anything goes except leaving them lying about to be stepped on….. don’t do that. 🙂

The ukuleles arrived just as school was starting and our students were THRILLED…. BUT we could not start playing the ukuleles right out of the box because they all needed to acclimate to our classrooms and tune.

The day the ukuleles arrived, we unboxed them and stored them as they would remain for the school year. Then the tuning process began. We took our time because we did not want to break any strings by being over enthusiastic in our initial tuning. While attachable tuners may be great, neither of us had one, so we just used an app on our phones. We tuned at least once a day, sometimes 2-3 times a day for about a month. When we first started tuning, it took about 30-45 minutes to get through all of the ukuleles. However, by the time we were ready to start playing with students, we could tune the entire class set in about 5-10 minutes.

Some music teachers like to teach their students to tune. We didn’t find that we had time for that. Also, the burden of daily tuning lessened as the ukuleles got played. To us, it didn’t seem to be a necessary step.

We did have students who purchased ukuleles on their own who would need help with the initial tuning. In those cases, we would invite the students to leave them in the music room for a couple of days and we would tune as we had time.

We also found it helpful to post links to trusted YouTube videos on our online learning platform so that families who purchased ukuleles could help their children tune.

Before we ever had a ukulele we purchased a method book called “Strum It Up!” We really liked the class offered by the authors because their advice about the use of ukulele was supremely practical. This book is VERY simple and straight forward. Best of all, it includes folk songs that you might do anyway and Orff parts for other instruments. We wanted to add ukulele to our curriculum, but we didn’t want to replace anything, so this book was where we started.

The very first chord we taught was an F chord. It’s great because it uses only one finger to strum. We were able to have students sing and play “Are You Sleeping” and “Row Row Row Your Boat” while they strummed on the first day. Everyone left feeling successful.

The second chord we taught was C chord. C chord is not too hard, and suddenly you have a V chord for the key of F so the number of songs that can be played increases significantly.

Before long, with two chords students were able to play the song experience games they had been singing since kindergarten on the ukulele.

After we learned C and F, we decided to add G7. We chose to learn G7 because it seemed SLIGHTLY less complicated than G. In year one, after we learned those three chords we could feel the students differentiating themselves into two camps…. those who wanted to learn more chords, and those who for a variety of reasons wanted to continue with the 3 chords we knew. Due to time constraints in 5th grade, we decided to finish off our ukulele unit with a lyrics writing project.

Students were encouraged to choose one of the folk songs we had played on ukulele. They were then encouraged to compose new lyrics for the folk song. As many lyricists do, they were free to collaborate with other writers. Students then signed up for an “open mic” where they could play and sing their original lyrics. The students had a wonderful time writing, loved accompanying themselves on the ukulele and learned quite a bit.

Learning to play a stringed instrument requires the development of fine motor skills that MANY students are lacking these days. The problem was compounded by the fact that we only see our students once a week. Finger fatigue is a great reason for students to have their own instrument because playing more is helpful. However, it is also a great reason to have some sort of check out program so that students can address their finger fatigue over time through practice. In the meantime, the best solution we have is to have children share instruments so that they can rest their hands.

When students are not having a turn on the ukulele, they should be doing something else constructive, like playing a barred instrument or creating movement or playing a game. Managing those turns and having all of those moving parts is something that I hope to manage better in the future.

To dot or not to dot…

We are hoping to start a ukulele club within the next school year for two reasons.

We are also hoping to get a few more ukuleles.

Since the last donorschoose.org project was funded, my district has modified it’s policy toward the use of donorschoose.org as a funding source for classroom materials. Before submitting a project on the website, we have to seek approval for the project from both our campus and district administration.

Once we receive funding for the new set of 10 ukuleles then we will either submit one last donorschoose.org project for 5 ukuleles OR we will add 1-2 ukuleles at a time as we can afford them within our budget.

Questions for my fellow music teachers

Please answer the following questions in the comments.