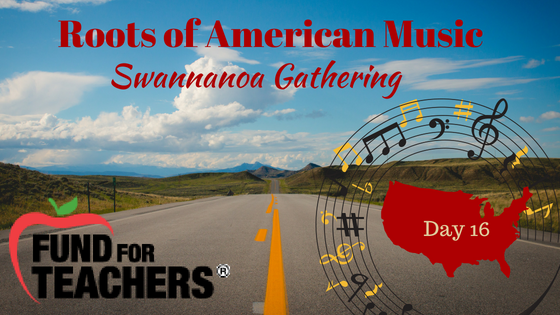 Appalachia to the Ozarks

When we arrived, Joe warned us that it would be a day of sad songs, he was soooo right!

The first we had a look at was “Sinking in the Lonesome Sea” . As is usually the case, Joe’s version is unique when compared to the recordings of the song done by other folk artists.

Then we sang, “Old Daniel Prayed”.  Our version was sounded similar to the one featured in the video below.

Then we learned a song by the well respected ballad singer Almeda Riddle.  The inspiration for the song she wrote was the tragedy losing her husband and oldest child to a car accident.  She sings the song to her surviving child who was just a baby.  I didn’t record this song, and I was unable to locate a recording in the limited time I have.  However, the lyrics are beautiful and poignant.

My sweet little one with your winsome ways

And that mop of tangled curly hair

You look at me with a look so wise

As you sit and you play in your corner there

Dearest to me none can ever be

And nearer, no, there’ll never be none

For in your sparkling eyes I see

The favor that tells of a long lost love

He sleeps out there ‘neath the snow tonight

My long lost love of yesteryear

I sit alone in the firelight

And watch you play through my scalding tears

Here is a brief introduction to Almeda Riddle and her legacy.  At the end of the link there is a video where you can find out more about her and her life. In this video she reminds me greatly of my great grandmother Mabel Clara Hooper (Maw) who I never heard sing, but who had a similar cadance to her speech.

The video above is OK, but to REALLY enjoy it and hear the words, you can go to Joe’s website and listen to the track.  It’s wonderful.  Here is the link.

After the ballads class, I took some time to do some writing and reflecting, we’ll see how that goes.  I really enjoy the headspace I get to inhabit when I have the time to write music.  Trying out different things, crafting the lyrics and playing with melody give me great joy.  It has been such a very long time since I have been free enough to practice the craft, I am soaking it up and relishing every moment I can steal from other things.

My second class of the day, which I will attend for the remainder of the week in lieu of shape note singing is a master class on song interpretation and expression with Karl Scully who is a classically trained singer and who is famous for his work with the Irish Tenors.

I didn’t really know what to expect, but today we heard four classmates sing a song of their choosing for the class. Then as a class we coached them toward making the performance better.  This class is an interesting choice for me because it has been years since I have had anyone listen to me sing anything with a critical/constructive coaching framework.  I was pleased to say that the class was kind and supportive of the brave souls who presented work and each of them performed better after the session than before.

My dilemma is that I don’t really have anything prepared to sing…. I’m sure that I can come up with something, it’s just a task I have to be ready for by tomorrow.  Since I am a late arrival to the class, I am flying standby.  My song performance will be critiqued on any one of the next three days.

If you have a voice you can sing!

We worked on the two songs we began learning yesterday, but then we moved on to a praise song from Ghana.  Dr. Bullock told us that anywhere in Ghana if you begin singing Da N’Ase people will jump in and begin singing along with you.  The praise song that she taught us today is typically used as an offering song in church regardless of the denomination and is often sung with the “high life” rhythm.

When we sang it in class we were literally dancing around the room with joy.  I don’t know what the “b” phrase of the song translates to in English, but the most repetitive lines in the song translate into Thank You Lord!

We sang it in four part harmony, and in this class I typically sing the tenor part. I don’t want to forget the song, so I’m including a very plain recording of just the melody.  It’s really kind of sad sounding, BUT if you want, I bet you can add the other parts in as it is REALLY catchy!   Tomorrow I’ll ask Dr. Bullock if I can put the recording of us singing this song on my blog as it is quite nice, I just don’t want to share it without permission…. 🙂