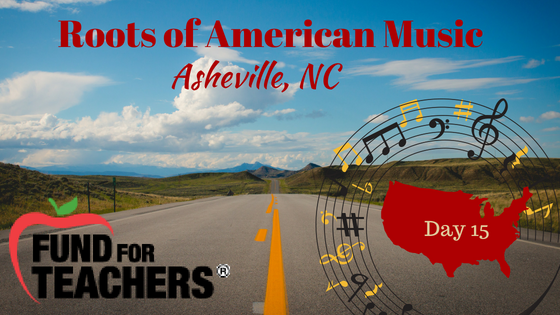 What a treat today was!

Today I attended three of the four classes I signed up to attend.  I might have attempted all four, but last week we did 3 classes and by dinner time each day my brain was fried, so I figured that in order to use my time wisely and to actually gain all that I could from the courses, I would do as the folks at the Swannanoa Gathering suggest and choose fewer classes to focus in on.

I began today with a class entitled from Appalachia to the Ozarks. It is taught by Joe Newberry who can be seen here playing a song from West Virginia.  Although this video is not from the Swannanoa Gathering, he did sing it at this evenings concert and it was both beautiful and haunting.

In class we learned that Joe’s family is from North Carolina.  In anticipation of the Trail of Tears, his family which included some Cherokee, left North Carolina and headed into Arkansas and Missouri into the Ozarks. Some of the songs he will share with us can be traced not only back to North Carolina but to Great Britain.

Today we began class by singing his family version of Barbry Allen.  After class I came back to the dorm and made a quick scratch recording of the first few verses of the song so that i would not forget the melody.  It was interesting because within the class there were others who knew different versions of Barbry Allen as it is a famous ballad.  Here is some historical information pertaining to the origins of the ballad.

One of the things that makes ballads so interesting is their transformation over time, there are many different versions and the one that we learned today is no exception.  It has an entire verse that Joe has been able to locate in print and he believes it to be unique to his family.

As soon as I got back to the dorm, I made a scratch recording of the melody that Joe taught us.  I didn’t attempt the entire song as it is rather long.  You can hear differences in the melody right away, but the words are very similar. One of the difficulties in capturing the ballad is that ballad singing is entirely unlike any other sort of singing that I’ve done before.  When people are really good at it they can add all sorts of bends and turns.  Right now, I’m just trying for a simple rather than complex sound… pitch bending and embellishment can come later.

The next song we began to learn was one called “On Top of Old Smokey”, but don’t worry it is not at all cheesy, but rather sad and tragic like most ballads.

The version we learned was most similar to this recording by Roscoe Holcomb.  I don’t yet have it down good enough to record.

We then sang a song that was entirely unfamiliar to me that I love called “Go March Along”.

Here is a recording that is almost identical to what we did in class, the difference being that we were in a room full of people so there were LOTS of rich improvised harmony going on.  🙂

My second class of the day was a trade with another camper (which is frowned upon), but between this week and last week there are only so many ballads one girl can sing, and, I was supposed to go to ballads, so instead I went to shape note singing which I have heard about for so long and never got to do.

There are two systems of shape note singing, one uses 4 shapes, the other uses 7.  Today, we used the 7 pitch system.  Each pitch, (do, re, mi, fa, sol, la, ti,) is assigned a shape.  Everyone sings their part using solfege syllables and then they add the words.  The teacher for this class is one of my new favorite musicians because he is young and energetic about all that he knows and he knows alot!  In addition to teaching shape note singing this week, he is also teaching a music theory class. I couldn’t find a video of him singing shape notes, but here he is playing and singing several other instruments.  He truly is a treat to listen to!

At tonight’s concert he played a REALLY FAST guitar piece and it was fantastic!

I LOVED shape note singing!  BUT, I can’t do that for a whole week, I liked the music, but everyone was singing as loud as possible and THAT got old real quick.  Josh did a great job of meeting the participants where they are and actually had the group sounding musical with dynamics by the end of the class, but at lunch I heard one of the ladies assigned to my part say out loud that she had always been taught that if you could hear the person singing next to you then you weren’t singing loud enough….. so I’ll admit that although I hope to join some of my Houston friends for some shape note singing, I think I’m done for the week with that class….BUT now I know how shape note singing works!  🙂

Based on the teacher showcase yesterday, I knew I wanted to adjust my afternoon schedule officially.  I was successful, but I didn’t know I was successful until after my next class, which turned out ok, because I REALLY needed to make a Wal-Mart run and the class I will take tomorrow is sort of a master class format anyway, so even though I’m sad that I missed today, I am pretty sure it will be ok.

I got word of my schedule change in time to attend the last class of the day, entitled, “If you can speak, you can sing”.

Dr. Kathy Bullock is leading a gospel choir in the morning and then teaching this class in the afternoon.  Since I couldn’t redo my entire schedule, I figured one class with her is better than nothing, and I was SOOOO right!  You can read more about her work on her website HERE.

At the beginning of class she talked to us about what it was like to take students on month long study trips to Ghana Zimbabwe and South Africa.  She said that the first time she had a group of students with her, they were gathered in a village at the chief’s palace.  Upon welcoming the group of visitors to the village he announced to the community that the students would sing a song.  She and her students had not prepared anything because their purpose on that trip was in no way musical. Her husband sang instead, and when he was done, the chief invited the men of the village to sing and they ALL did.   He told her that as students, they sing when they wake up, they sing when they work, they sing when they eat, so of course they could sing for the community.

She explained to us that in the culture of this particular chief, to sing is to exist.  If you don’t sing, you don’t exist.  The title of her course is intended to convey they fact that truly everyone has a voice.  Everyone can sing, because each of us exists.

Then she taught an amazing song from South Africa.  The group in the class was small, but mighty and we sounded good.  However, to get the full effect, I’m going to share this video.  When we sang it in class I got to sing TENOR! 🙂

Peace in this world of sin (Hallelujah) the blood of Jesus brings peace.

Redemption in this world of sin (Hallelujah) the blood of Jesus brings Redemption.

Praise in this world of sin (Hallelujah) the blood of Jesus brings Praise.

Faith in this world of sin (Hallelujah) the blood of Jesus brings Faith.

Victory in this world of sin (Hallelujah) the blood of Jesus brings Victory.

Comfort in this world of sin (Hallelujah) the blood of Jesus brings Comfort.

We finished class by learning the first part of the song,

Imvula (RAIN) which is an Old Apostolic Hymn.

The translation is as follows:

I can’t find any recordings, but I hope to be successful tomorrow!

It was a rich day of learning and I even found a little time to write.  Nothing special, but part of writing music is getting into the discipline of doing it every day even when no particular idea jumps off the page.

For my friends who have been faithful to pray for me along this rather interesting travel journey, I would ask that you would pray for my endurance.  Simply put, I’m ready to come home and being home is about a week and a half away which seems like a century at the moment.  I am so enjoying my time here, but one of the reasons why I don’t travel terribly often is that I like being where I am.  Nothing reminds you of how awesome home can be until you are away from it.  Pray that I will take the time for the respite and inspiration it is intended to be and that I will be focused on where I am.