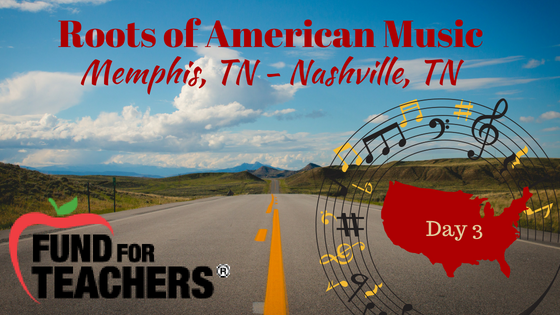 Day 3 – Today was all about driving and exploration and a little bit of rest before a big day in Nashville tomorrow.

Interstate 40 between Memphis and Nashville is a treat. Next time I visit this area I am going to bring my hiking boots and a boat and seek out some opportunities to explore the many forests and waterways along the way.  I LOVED driving through the hills! It’s hard to tell how high the hills are in reality because the trees are so tall.

Riff the Musical Ranger especially enjoyed being on the “Music Highway” and insisted we take his picture by all of the famous singers every time we stopped. 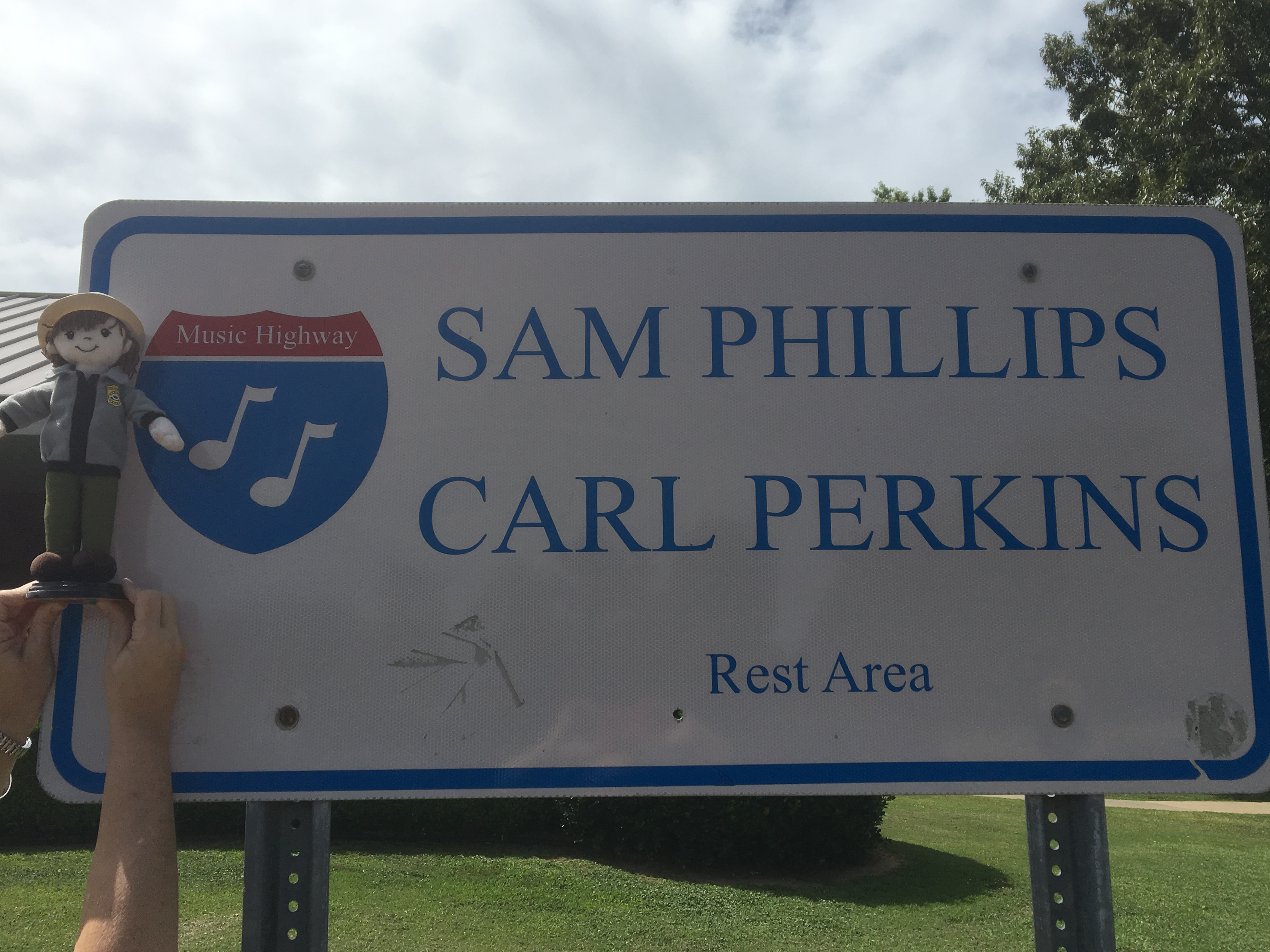 I learned yesterday that Sam Phillips was the founder of Sun Records in Memphis. Carl Perkins was one of the early Sun Record artists.

You might enjoy a sample of his music here.

Along the Music Highway there were signs for various state parks filled with all sorts of natural wonders and historically significant places to explore. For example, yesterday in Memphis I had seen a song title “The ballad of Casey Jones” and though I listened to just a moment at the Rock and Soul museum, I was hoping to learn more. Today at one of the rest stops along the Music Highway, Riff the Ranger found a display which gave more information about the historical events that led to the well known ballad. 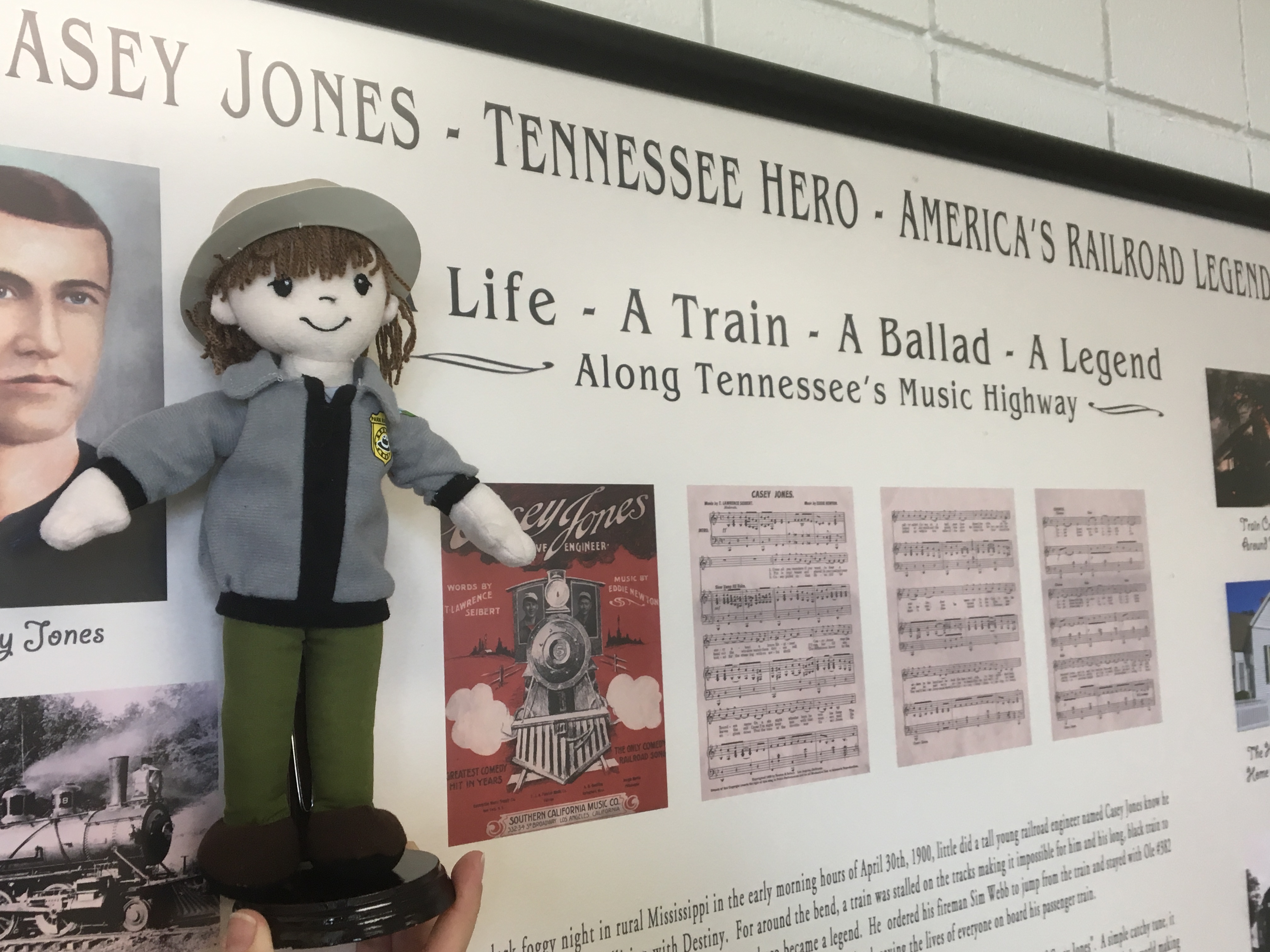 Casey Jones worked for the railroad. He found himself in a situation where by giving his life he was able to save the lives of many others. In response to his heroism, a ballad was composed about it his life and became a very popular song. Just along the Music Highway you can visit his home and learn more about his life. If you would like to know more specific details you can visit

Throughout the day we also saw signs for and sometimes even drove on parts of the Natchez Trace Parkway which is a scenic 444 mile route through middle Tennessee, Mississippi, and Alabama.  The original foot path or “trace” was originally used by Native Americans as early as 10,000 years ago and then eventually by European explorers and settlers.  Perhaps one day I will have the chance to explore the parkway as it was meant to be explored, but for today it was fun to make note of when we crossed it as we wandered or to take note of the beauty when we were actually on it for a few short miles. 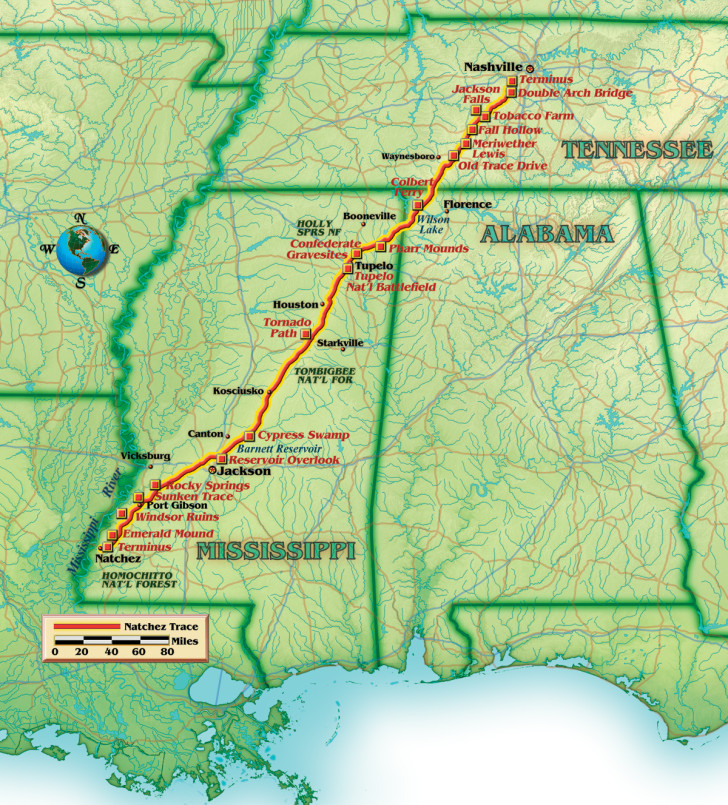 photo credits and RV information can be found here.

As soon as we got to Brentwood, we checked into the hotel.  Riff the Ranger was ready for a nap, so we left him to it. 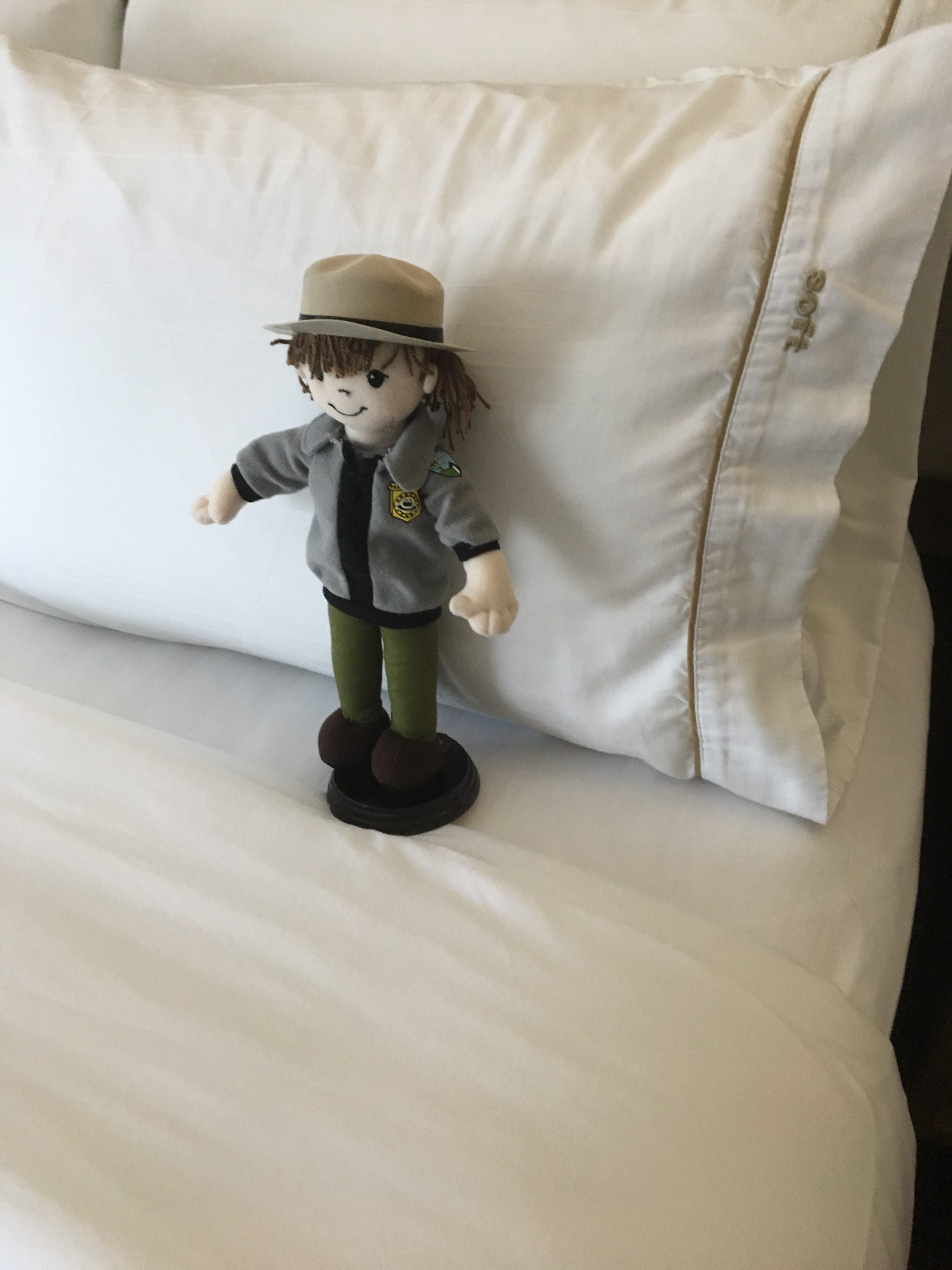 Upon the recommendation of a friend, we decided to go to the Loveless Cafe for a late lunch / early dinner. 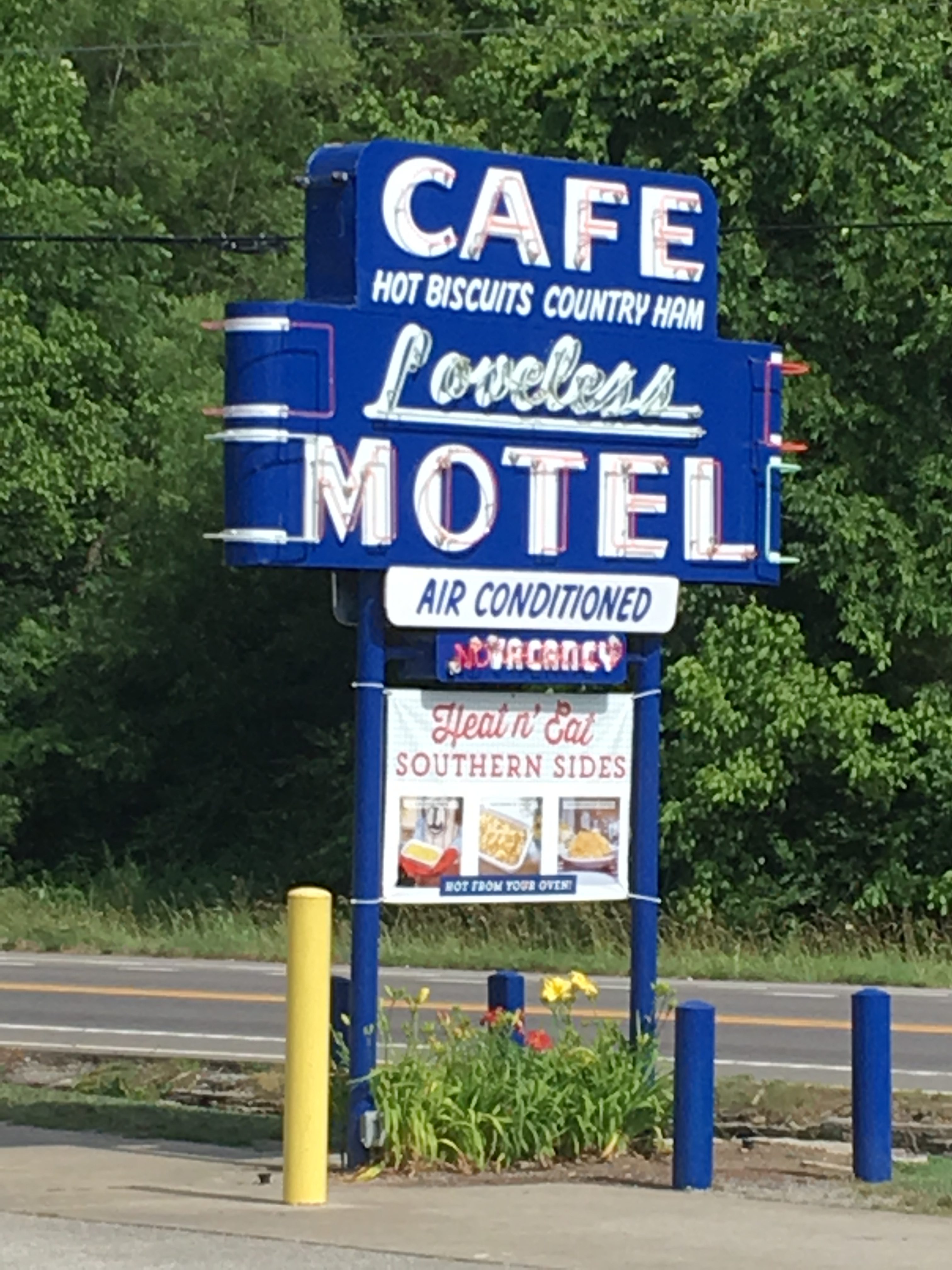 As we were leaving, I noticed a sign that said the Loveless Cafe was the best place to bring visitors from out of town. The honor was well earned. The food, service and atmosphere were all super fun. I had fried chicken, fried green tomatoes and hash brown casserole. However, the best thing at the Loveless Cafe are the biscuits and preserves. 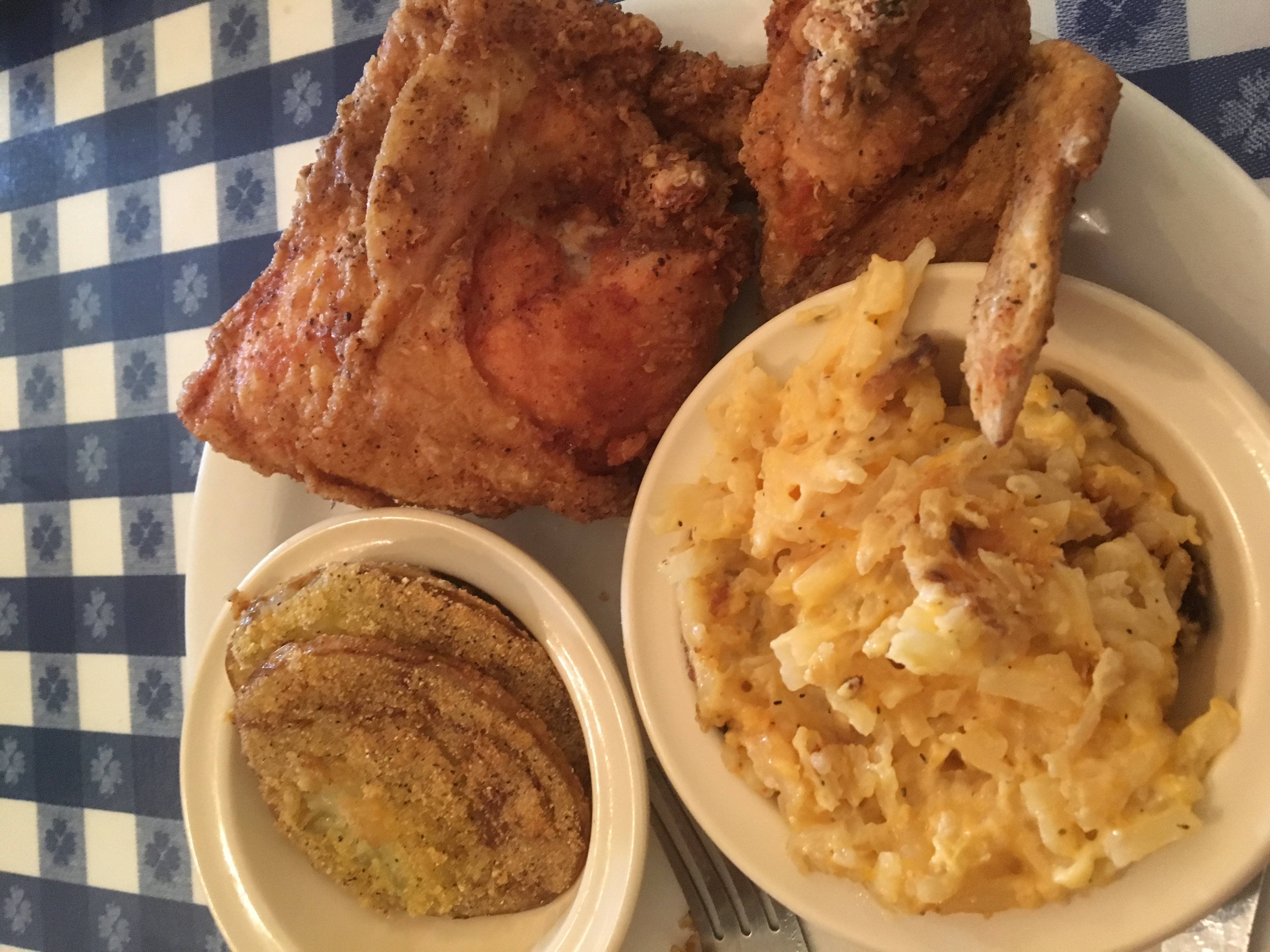 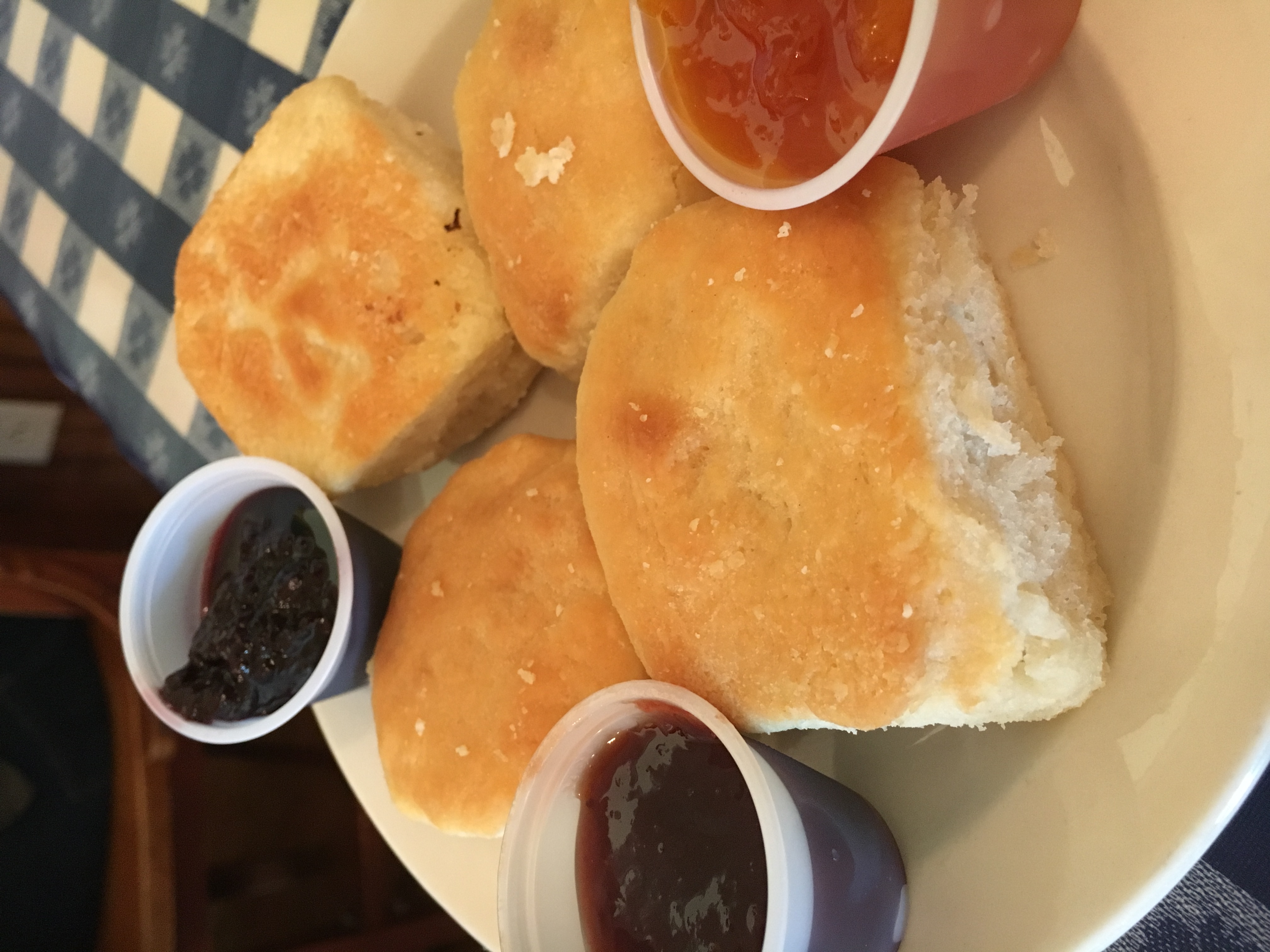 Because there is so much to see and do in Nashville, and because tomorrow we have tickets for the Grand Old Opry, we wanted to explore (drive around) and look at everything today. Driving around Nashville during the afternoon rush meant that stopping here and there to take pictures wasn’t a good idea. However, the highlights of our window-shopping-style first glance at Nashville included Vanderbilt University, Belmont University, Belle Mead Plantation, Music Row, the Roman Auditorium, the District and the Target next to our hotel. Now when we go tomorrow we will know where to park and we will have water so that as we hike from place to place we will be well hydrated.

Now we are settled in at the hotel and I am doing laundry. After 3 days of morning to midnight driving and exploring, doing a load of laundry seems like a luxury, but I can’t wait for tomorrow!