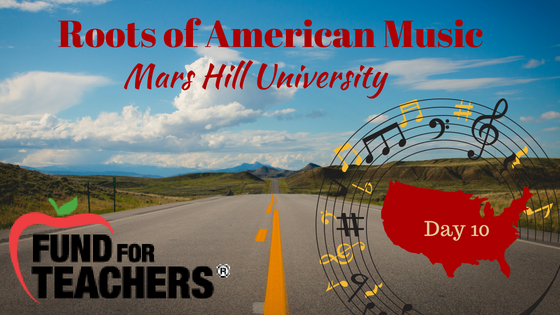 In ballads we broke up the SAD SAD SAD ballads by learning a tragic yet amusing ballad called the “Sewin’ Machine Song” I’m glad I recorded the lesson because I’ve tried to find a recording online and have not have any success… so far, (I didn’t look very long).  However, after all of the TRAGEDY songs, even a song about a woman running off away from her house in her pjs seems like a hoot, even though it’s still sad. 🙁

Here is a taste. It is still a fun song.

Then we moved onto a more somber, serious and relevant ballad that tells a story about the possible tragedies of drunk driving and ends with a reminder to stay sober behind the wheel.  The recording below has essentially the same melody and lyrics that we used.

We reviewed some of the Aunt Caroline Dyer and the Wild Woman Don’t Have the Blues from the previous two days, but then we add what I would call a blues ballad that tells the woes of a convict guilty of murder called 99 years blues  While we did spend a considerable amount of time learning to sing the song, we also spent a good chunk of the class learning how to play this song on guitar.  It only has one chord, so it is a good intro to fingerpicking.  It’s a ROUGH song, with language about guns some might be especially sensitive given the world we live in today.  However, it is exactly at this place of tension between what is happening around us and a need for us to express it where blues and ballads find their most useful place within musical genres.  The subject of the song along with the “hop along” guitar work almost make the words and their implications jump out more starkly than they would if the song sounded like a dirge.  – Listener beware!

As a writer I have always used songwriting as an expression of my faith in Christ.  As such I have never had the inclination or need to write anything that was not in some way related to my own faith or as an encouragement to the body of Christ. I don’t intend to give that up in any way.  I’ve also written minimally for school (for my students) but very little of what I write for school has any real substance.  Meanwhile as I explore all of the richly poetic texts of the ballads and blues songs that I am learning, the authenticity of the experience and artistry as told within the confines of these secular ballads and blues songs is quite compelling and new.

I learned during our songwriters circle  that a few of the participants had once formed a song writers group who shared weekly songwriting challenges.  They were given a theme each week and challenged to write a song based on the theme. One week everyone might submit a song about trees, or pets or whatever as an writing exercise simply for the practice in writing.

So, as I faced a songwriting challenge the question quickly became, “what sort of song should I write?”

During our 4:15 concert yesterday that featured my duet instructors, it was raining fairly steadily, and I thought and noted on my phone the phrase  “How many raindrops are in a cloud?” .  Immediately after dinner I rushed back to the dorm and instead of going to the open mic down the street as was scheduled, I finished up my blog post as quickly as I could and began writing.  By about 8:30-9:00ish I had a song.  As I wrote I was trying to write a “country” song.  While it’s not perfect, I think it’s pretty close to country and I think it’s sad, so there’s that…. I’ve never written a sad song before, so it was a stretch.

During the song writing circle I was able to share both, my new song, “Now that you’re not around” and an older song that I wrote a few years back called “Peace Be Still”

We worked on two duets today.  The first seemed a little more approachable, but as you see it took some time for me and my partner to find a key that fit both of us. The duet is called East Virginia Blues.and it’s really fun to sing.  The problem arises when you are given the task of singing the part that upon first hearing would be more difficult for you.  My valiant singing partner has a lovely rich alto voice and is more comfortable singing lead, while I would prefer to sing in a higher key or take the higher harmony.  The assignment was to see if we could find a place where I could sing lead and she could sing harmony.  As you will hear, we had a really fun time trying to get it to work, then in the second recording, you can hear that after some coaching and lowering the key of the song just a little bit, we found the place where both of us could sing in a way that suited the style of the song.

Here was the one where we got a little silly.

Then here is the one where I get to sing BASS!  I felt like I was growling which I don’t intend to do often, but it’s nice to know HOW to do it if I need to  AND it was fun.

I’m also pleased to say that this lower more nasally singing is not at all painful which going into this series of classes was a concern of mine given my recent vocal problems.  But as of Wednesday, I’m still good. No pain or tension! 🙂

Once again after dinner, I was determined to write a song.  Because I had played my new song for my friends at the songwriting circle, I was satisfied.  ALL of the folks here are light-years ahead of me in their guitar skills and so even though I enjoy the opportunity to practice, I am not super enthused to play my guitar in front of folks solo AND to be fair, they wouldn’t be super enthused to HEAR me play solo… unless I was playing so low that they couldn’t hear me… 🙂  But I was writing, so I was happy.

I got about half way through a 2nd new song and when I went to record it, I realized that I had simply written new lyrics to the song from yesterday, so I tossed it out and wrote an entirely new song on a whim in a different key and a different meter.  I was trying for a bouncy, country-ish song.  It is not as good as the first one because I got the whole thing down in about 30 minutes.

THAT would have been enough, but about the time I was finishing up my song, I could hear a group of people playing their instruments in the lobby.  It was five minutes before the open mic was scheduled to start down the street.  On a complete wild hair and without a lick of thought. I rushed out and asked one of the guitar players if he would play my song with me.  He agreed without hesitation, we played through the song ( the second song I had finished about five minutes before)… and then I realized I didn’t even know his name… crazy…  So a group of us got down to the end of the street to the restaurant that hosts the open mic night and when I walked in the organizer asked me if I was ready to play.

Between the time I signed up to play and the time I actually played, the one song a piece arrangement had turned into two songs a piece and the guitar guy had arranged for a string bass to join us.

So all of a sudden it was my turn and I marched up to the little stage with my guitar and my words and my volunteer impromptu band and just as we got started the song (melody) disappeared completely out of my head ( for about 5 seconds that seemed like 3 years).  During the two measures of vamping it took me to unfreeze, I remembered everything and sang in front of a crowd of strangers two brand new country songs that were very well recieved.   I got about half way through the first one and it was almost like I was watching from the back thinking to myself, “WHAT IN THE WORLD IS THIS CRAZYGIRL DOING!!!”  but ya’ll it was so so so so so so so so much fun!!!!!  I was in good company, ALL of the open mic participants were members of the conference and are people with whom I have been taking classes, jamming and sharing meals with all week.  The last time I got to sit around in a bunch of pulled up chairs and play music with people with this same ease and comradery was at Howard Payne and it is a joy I have truly missed.  I got back to my seat and my heart was racing and I realized I forgot to hand someone my phone to record it! 🙁  While I might convince another more confident guitar player to play with me, the chances of me getting to hear my songs with a string bass are pretty slim.

The two recordings I have included here are ones that I JUST made in my dorm room and they are mediocre cell phone recordings, but you will get an idea of what I’ve been up to.  In making these two recordings this evening, the first song that I wrote most quickly will MOSTLY go into my song scrap bag, but that’s ok… The point was to write something… even if it does remind me of school house rocks. 🙂  The second one (that I wrote first) has potential but is still pretty rough in the way that all new songs should be. 🙂