October – The “scary” realities of a busy music teacher 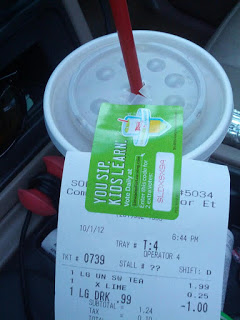 I haven’t had time to blog like I planned during the month of October because apparently this year October is the perfect storm of crazy busy and I haven’t had a moment to spare until now.

Limeades for Learning which is a funding partnership between Sonic and donorschoose.org  was moved from August and September to October!!!!  YIKES!  During Limeades for Learning I turn into a Sonic crazed fiend, sniffing out votes and potential voters with rabid determination.  – Every where I go I have people who love me and my students handing me green stickers…. which means that they want to help me, but don’t have time to enter the vote codes…. I’ve spend hours and hours and hours entering vote codes this month…. It can be quite labor intensive and eats up lots of time that I could spend blogging.   However, entering vote codes is time well spent and pays off because I am usually able to get multiple projects funded. This year, even though it was October and I had less time, I had more help, so I’ve gained less “sonic weight” than last year AND I’ve been able to fund 3 projects and I am hoping that I’ll still have time to fund the fourth this week…. 1 bass xylophone, 10 electric pianos, 4 microphone stands and 2 microphones with cords and four cordless microphones later I would say that is time well spent. My students deserve my hard work! 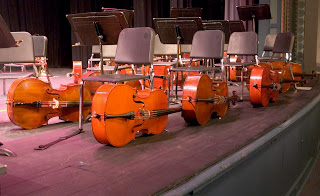 5th grade show – Somehow and I’m not sure how…. ok…. I know how….. we got behind on preparation!!!!  YIKES! Our annual trip to the Houston Symphony was moved from January  to October 4th…. This was something we didn’t know about until our calendar was set….. So instead of introducing the show  throughout September while doing other 5th grade things, we had to cram Symphony preparation in there first….  .I compounded the problem by throwing technology into the mix…. I decided it would be great to use Edmodo as a way to discuss the music we would hear….. It worked really well and I will do it again, but Technology is no short cut and although their participation and preparedness was improved, it took time!
They loved the Symphony in part because well prepared students behave better and well behaved students are more receptive.

Sooooo October has become hurry up and learn month for my poor 5th graders who by no fault of their own are behind on their preparation for their HUGE 5th grade show…. The show is  Monday and Tuesday before Thanksgiving…. and who moved Thanksgiving? It’s early this year!  Which in music teacher time means that it may as well be tomorrow for how much time I actually have to get them ready. 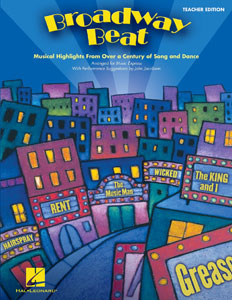 The good news is that they are singing difficult music quite beautifully and really enjoy it and so their motivation is just about right…. Since I don’t want to burn them out on the music, this rushed feeling might work in our favor because if I can plan the next few days really well, they might just catch “performance fire” at just the right time.

The best decision I made this year in regards to the 5th grade show has to do with after school hours.  Our campus has an after school grant and each year I teach several classes.  This year, one of my 1st grade teachers took on class piano which freed me up some of my after school days.  Now I teach a class guitar group on Mondays and then on Tuesdays I had my 5th graders sign up for musical theater…. These are the students that are doing all of the speaking parts.  The best part is that even though I might not have chosen those particular students to have speaking parts, they are the ones that really want to have speaking parts and so the work they are doing is important to them.  That hour a week ensures that they actually practice which is so much better than getting to the week of the show and having students read their parts for the first time simply because they lost their script and didn’t bother to get another one…..  I’m looking forward to reaping the benefit of that time when we start rehearsing as a grade level and all of my speakers are already set and ready to go!  YAY!    I also decided to have a theater tech class on Thursdays.  This class is doing all of the work that I was doing myself in years past.  They are creating the back drop, learning how to run sound and lights, creating and managing props.  They LOVE LOVE LOVE it!  Plus, they can get more accomplished in the hour a week they are with me than I could in six hours by myself…. simply because there are more of them.  I don’t know why I didn’t think of that class before!

Grades were due on Monday  – Did I mention that we are up in enrollment by about 100 students?  The first report card is always the most challenging.  In our district students receive four participation grades and a conduct grade for music.  That is a lot of grades, but not in any way unreasonable…. we are quite busy learners…..so there is always something to grade! ! I do my best to stay on top of grades so that they don’t drown me, but the first 9 weeks is always the trickiest because I’m still learning kids, so I don’t trust that the child with this name “Joe” is really the same “Joe” that did “xyz” on this assignment…. even though I wrote it down immediately…..What if I’m really thinking about “Jow”, the student in the same class who didn’t participate at all? After all many of the grades I take are not written assignments.  So all I have to remember to go by are my own rubrics and notes….   Our grade books are online So in order to confirm “Joe’s” identity I have to get out of my online grade book and get to the individual profile page…. I’m hoping that “Joe’s” profile has one of those mini pre-k pictures that won’t enlarge… I’m hoping that by looking at that tiny picture of a four year old, I’ll be able to confirm that this 2nd grader really is the student who earned this grade. The MOST frustrating moment in grading is when I go to confirm a student identity and there is no picture!  I HATE that! This weekend I was thrilled when I figured out how to get to our grade book system on my iphone!  If I’ve done the preliminary step of setting up my assignments then I can save an entire step while grading because…. on my iphone the student pictures show up IN the grade book!!!! YIPEE!!!!!  Now that it’s time to grade for this coming 9 weeks, I am planning on carrying my iphone with me and inputting grades right there while teaching! genius!

Last night we had our 2nd annual School Carnival.  I’m a fan of Carnivals.  I like the interaction with families and they are just fun!   My team, PE, Music, Art and Library are in charge of Carnival…. I’m not a fan of being in charge of Carnival…. ONLY because it happens at a time of year when I’ve got November and December performances “breathing down my neck”….. However two things happened this year that made it sooooo much less stressful than last year….
1.  I knew it was coming – so I added those after school classes so that I could get show stuff done as part of my regular schedule.  Last year I was teaching guitar, piano and an Orff ensemble, while getting ready for a show and organizing a Carnival for the first time – ALL after school.
2. I wore better shoes.- last year I was crippled by the end of the day because of blisters. – I was literally in bed for 3 days following Carnival…. this year, after a four hour nap I feel human again…. I would say that is a vast improvement.
3. We had more help – even though we organized things, grade level teams did their own booths….

Now that there are only a few more days left in October I can say that I am THRILLED to be in the final stages of preparing for the 5th grade show because once it’s done I can enjoy my family, some turkey and some well earned rest in peace!